Having the vast wilderness of a national park as my backyard this past year at Arrowmont has been both overwhelming and invigorating. The first several months of the residency I hiked to become acquainted with the landscape and scout out locations. The natural art I discovered provided endless creative inspiration, but I had no real direction within it.

When I moved here I did not know about the 2016 fire that had swept through the park and town and its profound effect on the topography. I began to encounter trees burned to their core, deformed into blackened creatures of sculptural beauty. I had previously been making sculptures out of found tree pieces and had become obsessed with the transformative power of fire to create metaphorically compelling surfaces. Consequently, I was delighted to discover that I was immersed in so many forms reflective of my visual language.

A book project I had begun prior to the residency drew from personal narratives of death that I had acted out in the landscape.

Suddenly, here I was surrounded by the evidence of death and destruction on a wide spread human level, a very near and real history of a landscape that held individual human stories.

I was also unprepared for the number of tourists that swarm through the park in the summer and fall. Instead of solitary communion with nature, each hike was a very social, human encounter. I had hoped to find secluded places to make my work, but this was nearly impossible. Every time I ventured out I had to take risks and expose myself in public spaces. My biggest fears were encountering a bear or an unfriendly tourist. But being someone that is so comfortable navigating the woods, the dangers felt peripheral to me.

Then one day in October I heard that a woman had gone missing in the park. About a week later I heard the story of how she had gotten lost and was later found dead. This news was jolting. I suddenly became aware of the carefree and often thoughtless attitude I had about hiking. But when I learned that the trail she had gotten lost on was the same trail I had decided to use for a collaborative piece, a heartbreaking story became an unavoidable reckoning with reality. I had been collaborating with a composer artist-in-residence from the park to make a sound piece and dance drawing.  It hit me that I now had to hike back out on this very trail and follow through with creating my dance drawing. But now I could not do it as merely a response to the landscape. Now every footstep I took held the reverberance of a unique human life and tragic story.

The back and forth of the collaborative process with the composer became our way of reckoning with this unexpected event. The tone of the music he composed became a murky journey of imagined memory. It began to take form in a way that resonated inside me as telling this woman’s story. Yet we both agreed the sound piece must end with my breath and the distorted sounds clearing back into their original sound waves of chirping birds. This story of temporality was also representative of the cycle of death back into life.

I then had to do one of the most difficult things I’ve ever done in my art career. I drove an hour up into the cold fog of Clingman’s Dome and then hiked 3.5 miles along Andrew’s Bald trail to the lookout. It was fairly desolate and being alone felt haunting. I had hoped to be able to make this very emotional piece in solitude, but soon enough, even on this extremely windy late October day, there was a steady stream of tourists. At last, I gave up waiting and began to make the piece on the wooden platform overlooking the mountains as tourists looked on in bemusement. It felt like I was now the bear, the creature that both fascinated and terrified them.

After this day, my fears were both moved through and held in great respect. I began to carry a full backpack of safety gear and notify at least one person of what trail I’d be on and when to expect me back. I got to know a man that had been on the search and rescue team and learned some basic survival and foraging skills from him.

The human realities of the landscape settled deep into me. I began to create out of a place of awareness both of my nonimmunity to harm and my capacity for bold expression while pressing through crippling fear.

This was no longer simply a sublime landscape, it was topography of human narrative. It was a place of uncertainty and severity – much like the unexpected fire that devoured the town I was now calling home for the year.

In January, I made friends with a local woman. She took me around pointing out changes that had occurred in Gatlinburg over the years, showing me man trails and telling me stories of friends and family affected by the fire.

One day, I asked her if she knew of a place I could cut down a burned tree to make an art piece. She immediately called her friend who allowed us to venture onto her property. At first, I was solely focused on the form and aesthetic of the tree to be able to fulfill my idea. I found one that satisfied my vision and we went back to cut it down a couple weeks later. While there, my friend shared the story of how this woman’s house had once stood on this now flattened dirt patch, how her home and sister had burned here, how we were treading on a graveyard. I felt the gravity inside my body.

I had previously decided to embed a small video screen in the tree to play a performance piece. In the video, I am clinging to a tree with all my strength until my muscles began to shake and I have to let go, slipping behind the tree. I did not realize how relevant this choice was until I heard the story of the sacred ground I was now sourcing the tree from. Later, I thought of its title – Sublunary Embrace. My act of embrace has a quality belonging to this world as contrasted with a better or more spiritual one. On this earth, embrace is temporal, we cannot hold onto the objects of our affection.

This year has been one of learning about the fragility of the life and how our livelihood is intertwined with nature, our vitality inseparable from that of the earth. Having an entire year to develop a relationship with the landscape has shown me how important it is to have the time to immerse myself in a place. The attentiveness of presence reveals a new depth of reality. I now have a deep longing to engage fully with each place I venture – exploring diverse landscapes and encountering the stories they hold about what it means to be human.

Please view the performance video Sublunary Embrace here or see the full piece at Arrowmont in the Sandra J. Blain Gallery (on view until May 4th): https://youtu.be/OOqpVwuSsFQ

Alyssa Coffin is an interdisciplinary artist from New England. She graduated from Montserrat College of Art in Beverly, Massachusetts in 2014 where she received a BFA in illustration with a fine art emphasis and an independent study in creative writing. She spent a semester studying abroad in Ireland in her junior year to take some time to explore her work more independently. While there she discovered a personal visual language in sculpture, installation and performance. She is currently pursuing this work as a 2018-2019 artist in residence at Arrowmont School of Arts and Crafts in Gatlinburg, Tennessee. While here she has had the opportunity to work with the Smoky Mountain National Park and collaborate with their artists in residence to create new work that involves a more sensory experience. Her soon to be printed book, Remergance, juxtaposes poetic reflections with her artwork as an exploration of death and creation. 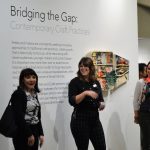 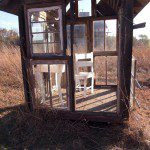 Introducing Our Fabulous Fibers Resident Skye Livingston
Comments are Off 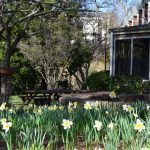 Introducing Arrowmont’s 2017-2018 Artists-in-Residence
Comments are Off